Please write down the artwork name that you would like to ask for more details
Add to Wishlist
Category: Uncategorised Tag: Yue Minjun

Yue Minjun is a Chinese artist best known for oil paintings depicting himself frozen in laughter. He has utilized this signature image in sculpture, watercolor and print, as well as on canvas. His work is often termed Cynical Realist, referring to the post-1989 movement. Born in 1962, Yue lives and works in Beijing.

Less than ten years ago, Yue Minjun sold his first three works at auction, and all were bought in. When one of his paintings finally did succeed at auction, in late 2004, it sold for GBP 19,323. His breakthrough came in the Sotheby’s sales of 21-22 June, 2007, when three paintings (“Untitled” of 1998, “The Pope” of 1997, and “Hats” of 2004) all sold within the range of GBP 276,000 to 2.2 million–stunning growth even by Contemporary Art market standards.
An Art Market Insight article written in early June of 2007 discussed the high-rollers of the Contemporary Chinese art crowd, saying: “To date, Xiaodong Liu is achieving the highest valuations of the Chinese contemporary artists…Amongst the artists whose works have estimates at under 10,000 euros, we would mention Guangyi Wang, Minjun Yue, Tiehai Zhou…” Three weeks after this Art Market article appeared, the aforementioned three Minjuns sold; elevating the artist’s market value so steeply, one would feel hard-pressed to imagine any work of his ever being estimated at 10,000 euros.

The piece, “Execution” of 1995, became the most expensive work sold by a Chinese contemporary artist, when it fetched £2.9 million (US $5.9 million) at Sotheby’s London in 2007. Until its sale in 2007, the painting had been owned by Trevor Simon, a junior investment banker who bought it with about a third of his salary while working in the region. Simon kept this painting in storage for 10 years as required by the conditions of sale. The record sale took place a week after Yue’s painting “Massacre of Chios” sold at Sotheby’s Hong Kong for nearly $4.1 million. “Massacre of Chios” (shown below) shares its name with a painting by Eugène Delacroix, depicting the 1822 event in Greek history.

The global financial crisis of 2008, of course, affected art markets everywhere. Yet the top of the contemporary Chinese market seemed minimally influenced, with Yue Minjun’s “Seeking for Terrorists” of 2006 auctioned for HKD 1.8 million at Christie’s Hong Kong. 85 pieces by Yue Minjun were auctioned in 2008, with a transaction rate of 78.46%, resulting in an RMB 84.81 million (USD 12 million) gross for the artist’s work. That year, Yue Minjun was also nominated for Time magazine’s “Man of the Year 2007” designation, the only artist on a short-list including Vladimir Putin, Barack Obama and Hilary Clinton. 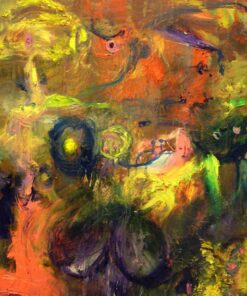 The Realm of Perception – Red Dimension

The Crow is Beautiful

Incarnation of Imagery A