Ban Zhang is one of the first Chinese pioneer sculptors living today.He was the finalist of the First year long contemporary Sculpture Exhibition at the He Xiangning Art Museum in 1998. In 2011, he had a Hong Kong Sculpture Biennial Exhibition at the Chinese University. Also, he has exhibited his works at Hong Kong Museum of Art,  West Kowloon Waterfront Promenade and won many awards such as the Hong Kong Contemporary Art Biennial Award and Philippe Charriol Art Foundation Award, etc. 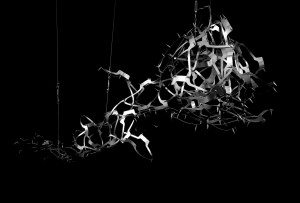 From Oct 30th,2014, Ban Zhang’s exhibition “The Pain of Happiness” with Green Art Asia, he aspired to relay the true meaning of happiness through his signature metal nails and stainless steel hanger works.

Life is a dark comedy and beauty.  Zhang highlights the existence of the pain brought upon by the intangibles – resilient emotions and pondered thoughts.

Ban Zhang illustrates the inner feelings of human feelings. His works are ironic yet humorous; he laughs about the world psychologically, politically and emotionally in which he illustrates that there is pain involved in everything. If you are brave enough, then you will get true happiness.There is no pain, no gain…

Art Taipei, formerly known as Taipei Art Fair International, is the longest-standing art fair in Asia, which has been organized by Taiwan Art Gallery Association since 1992. Following the success of past twenty years, Art Taipei 2014 will return with even more ambitious programs from October 31st to November 3rd at Taipei World Trade Center.

As the most experienced and professional platform for trading Chinese and Asian arts, not only do galleries from China, Hong Kong, Japan, Korea, and Southeast Asia gathered at Art Taipei each year, participants from Middle East Asia, Europe and North American are also no strangers to the event. Connecting the vivid art scenes and enthusiastic collectors from worldwide, Art Taipei became the spot which cannot be missed by influential figures in the global art world.